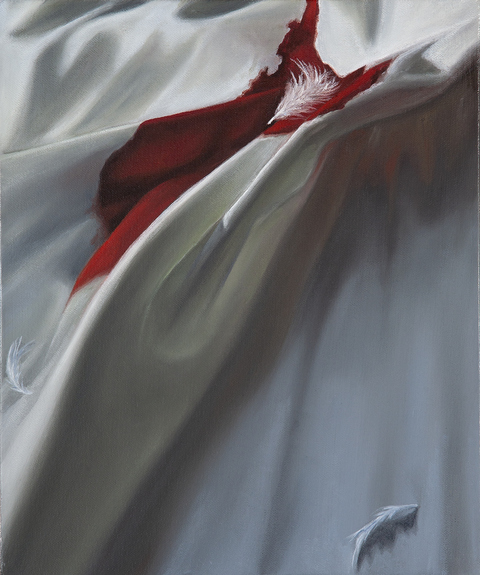 Leda and the Swan is a once popularized story and subject in art from Greek mythology in which the god Zeus, in the form of a swan, rapes Leda. The story generated a significant number of paintings, sculptures, and other artworks throughout antiquity with depictions often focusing on a recumbent Leda with copulatory swan. It appears that the post-coitus rest was what captured the imagination of most of the artists, or made the best ornamentations. Examining this story today is meaningful in the light of the recent US Supreme Court ruling to repeal women’s reproductive rights and, like Leda, establish a woman’s body as a repository, her consent notwithstanding.

In my Leda and the Swan series, Leda is present but she is not overtly depicted. It is not the appearance or purpose of her body that interests me in this telling, but the imagined aftermath or role reversal of the copulation that drives these works. Two paintings in the series depict Zeus, in the form of a swan, dead and undergoing various stages of a meal preparation; Leda is the implied chef in these pieces. Another painting of blood-stained sheets suggests multiple narratives including abortion (of the fowl fetus), slaughter, rape, or menstruation.